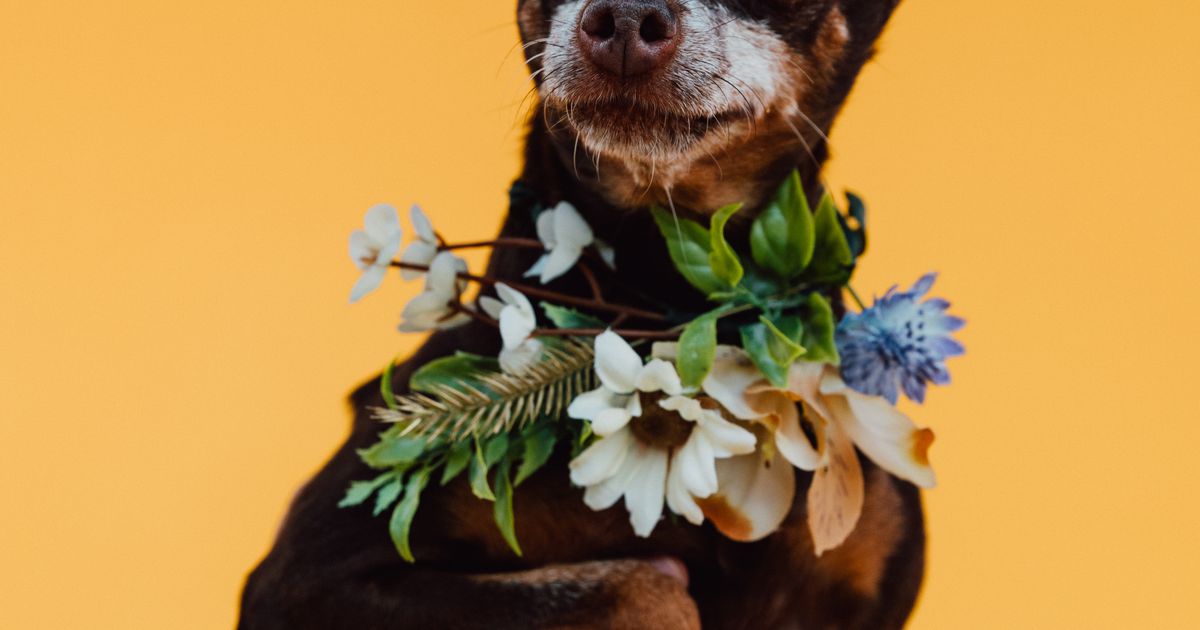 A pet portrait organization raised over $ 1,700 for the Community Animal Welfare Society.

(Amber Dwyer | Pawtraits Utah) A dog with a flower collar poses for a photo during the Pawtraits Utah fundraiser in the Maven District on July 31.

A squeaky toy captured the attention of a black and brown longhaired chihuahua on Saturday as it was held aloft by its owner, adorned with a floral necklace in front of a mustard background.

Just as the dog moved its eyes to the photographer – and the toy held over its shoulder – a quick snap captured Kenji’s profile in all its glory.

Animals of all shapes and sizes showed up for professional portraits for $ 35 early Pawtraits Utah fundraiser for animals on Saturdays. The organization’s first pet portrait event in Salt Lake City raised $ 1,720 for the Community Society for the Protection of Animals (CAWS), and with the success of this event, they hope to organize more.

(Amber Dwyer | Pawtraits Utah) A cat with a flower collar poses for a photo during the Pawtraits Utah fundraiser in the Maven District on July 31.

Pawtraits 4 a cause started in Houston, Texas, and raised more than $ 12,000 for local shelters, according to the organization Facebook page. It was started by Nadine Berns, a photographer from the Houston area, who is a good friend of Jessica Davies, the owner of Passion Flour, a bakery in the Maven neighborhood that hosted Saturday’s event, and Amber Dwyer, who photographed the event.

Before the event, Dwyer hoped that at least 10 people would come and raise at least $ 1,000 for the charity. An hour after the start of the event, 15 people were on the waiting list for photos, and more were on their way.

The clientele for Saturday’s event were mostly dogs, with a few kittens, a gecko, and a bearded dragon all in attendance for their close-up.

“It’s been wonderful,” Dwyer said at the event. “It was so unexpected and so wonderful… I mean, the more animals, the better.”

(Amber Dwyer | Pawtraits Utah) A dog with a wreath of flowers poses for a photo during the Pawtraits Utah fundraiser in the Maven District on July 31.

Passion Flour has made dog treats, gift bags and snacks for owners who have stopped by to take their pet’s picture.

“Three things we like [made us want to attend], which is CAWS, where we got it from [two weeks ago]Said Elena Clackner, who brought her dog Bonnie, a 5-year-old Lab / Catahoula mix, to the event. “Plus these portraits are really cute, and we love the [nearby] ice cream shop. “

Joe Bateman, who brought Kenji to have his photo taken at the event, also came to support the animal charity – with the added bonus of a keepsake of his four-legged friend.

“I mean, I take a lot of pictures of him, but I wanted a professional to do it,” Bateman said. “But also, they donate money to CAWS, which is a big rescue. I think the rescues could be a lot of work, you know, and a lot of money.

We hope there will be more opportunities for animal portraits during the holidays, said Dwyer, trading the summer flower wreaths for cranberries, pine cones and snow in the winter.

“We hope to organize future events,” said Dwyer. “We will be using different backdrops in the events, so there will be a different feel to them. And I hope that in the future we will have more themes. It went well [on Saturday,] we hope to make more fun in the future.

(Amber Dwyer | Pawtraits Utah) Two dogs are held up for a photo during the Pawtraits Utah fundraiser in the Maven District on July 31.

The Witcher 3: 10 Must-Do Side Quests When Visiting Velen